Palestine in Prophecy. A Short Review. 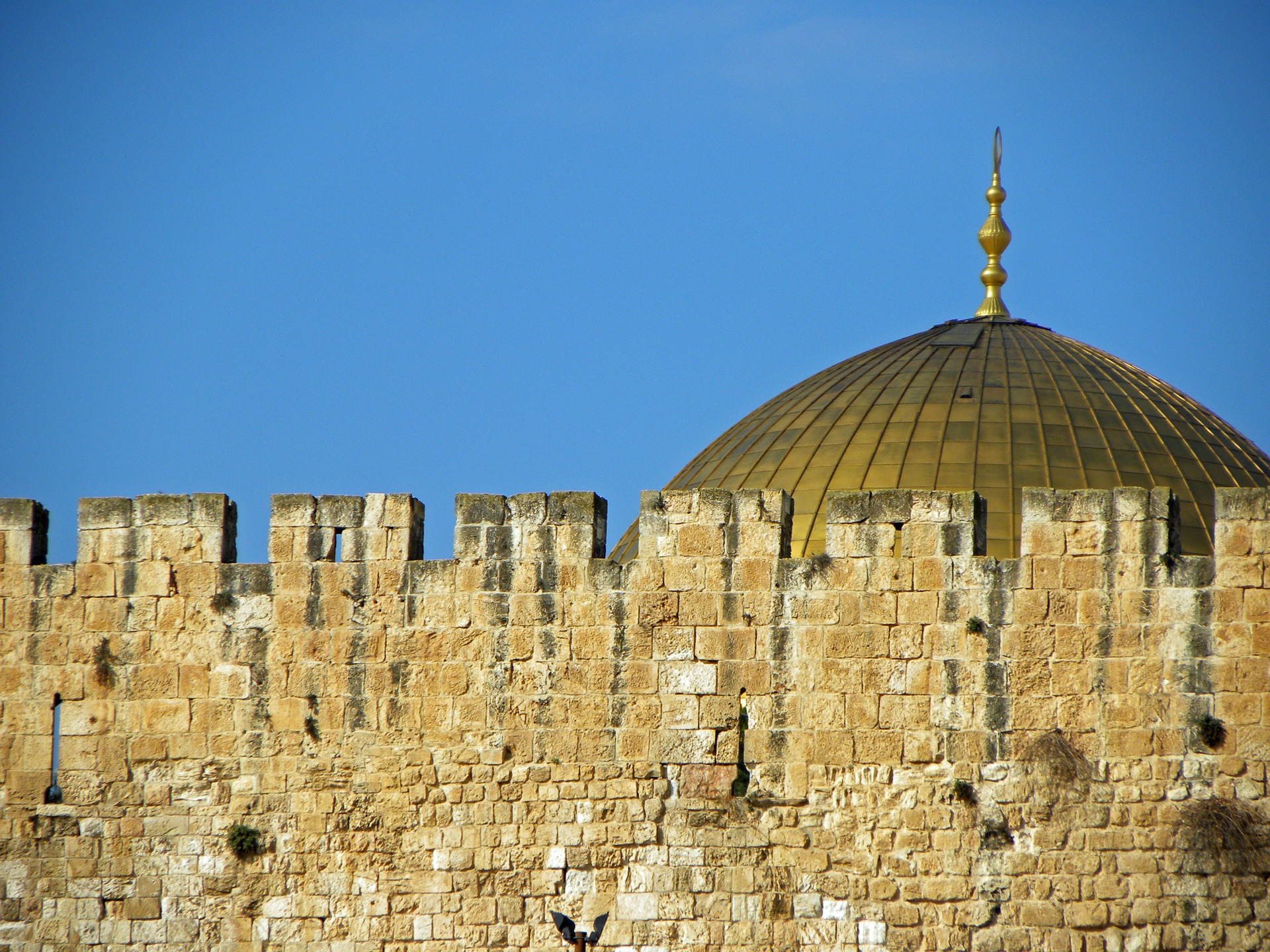 Palestine in Prophecy.  A Short Review.

Recently, a local parish publication ran a small item announcing that the Chairman of the “Temple Mount Faithful” had written to the Pope (22 January 2004), declaring that “today, Israel is the most exciting fulfilment of God’s end-time prophecies and promises.  The climax of this prophetic time will be the soon rebuilding of the Temple exactly as the prophets of Israel prophesied.”

That the modern Israeli state fulfills Biblical promise, that this land was given in perpetuity to the Jews, and that their “return” there actually heralds the end of the world, has been reiterated very often to demand Christian sympathy and even support for the Zionist enterprise, which is to build and maintain a Jewish state in Palestine.

The desperate struggle continuing in the Holy Land augurs very ill for the immediate future, however, and the Church is being urged to endorse the claims of one of the parties to the conflict on the grounds that this fulfills God’s will.

The Biblical promises should be set into context.  The promise most frequently cited, and probably the most familiar, comes from God to Abraham (Genesis 12:6-7): “And Abram passed through the land unto the place of Sichem, unto the plain of Moreh.  And the Canaanite was then in the land.  And the Lord appeared unto Abram, and said, Unto thy seed will I give this land: and there builded he an altar unto the Lord, who appeared unto him.”  Later, the promise is made more explicit (15:18): “Unto thy seed have I given this land, from the river of Egypt [not the Nile but the Wadi el-Arish, about midway between el‑’Arish and Gaza] unto the great river, the river Euphrates”.  Before the birth of Isaac, God makes a covenant with Abraham through circumcision (Genesis 17:8): “And I will give unto thee, and to thy seed after thee, the land wherein thou art a stranger”;  Ishmael was circumcised.  In promising the aged Sarah a son, God says, “and I will establish my covenant with him for an everlasting covenant, and with his seed after him.  And as for Ishmael, I have heard thee: Behold, I have blessed him, and will make him fruitful, and will multiply him exceedingly; twelve princes shall he beget, and I will make him a great nation” (Genesis l7:19-20): Abraham’s “seed” included Isaac and Ishmael.  “[Sarah] said to Abraham, cast out this bondwoman and her son; for the son of this bondwoman shall not be heir with my son Isaac.  And the thing was very grievous in Abraham’s sight on account of his son.  And God said unto Abraham: Let it not be grievous in thy sight because of the lad and because of thy bondwoman; in all that Sarah saith unto thee hearken unto her voice: for in Isaac shall seed be called unto thee.  And also of the son of the bondwoman will I make a nation, because he is thy seed” (Genesis 21: 10-12). Note that this passage, seldom quoted, establishes Ishmael also as the seed of Abraham.

The “everlasting” covenant with Sarah’s son Isaac was not unconditional, however. According to the Book of Deuteronomy,  Moses issued long, baleful warnings about the consequences of faithlessness: “The Lord shall bring a nation against thee from far, from the end of the earth, as swift as the eagle flieth….And the Lord shall scatter thee among all people from the one end of the earth even unto the other” (Deuteronomy 28: 49, 64). The subsequent occupation and deportation of the population of Samaria by the Assyrians (722 B.C. ) and the destruction of the southern Kingdom of Judah (586 B.C.), when much of the population was taken to Babylon (where, by the way, their communities flourished until the twentieth century A.D.) was evidently the punishment for disobedience and inconstancy to the Covenant.  So the prophets thought.  Zedekiah, last of the line of David, saw his three sons executed before he was blinded and taken in manacles to Babylon (II Kings 25).  This horrible conclusion ended two promises, (1) that the descendants of Abraham would inherit the land for ever, and (2) that David’s heirs would always reign: “thy throne shall be established for ever” (II Samuel 7: 16).

Jeremiah, in his Lamentations, mourned over the destruction of the First Temple in Jerusalem, which had been established and designed by King David (circa 1000 B.C.) and which lasted from about 965-586 B.C.  In 539 B.C. however, when Persia conquered Babylon, Cyrus the Great declared universal toleration, restored the gods of Babylon, and allowed the Jews to return to Jerusalem if they wished and to rebuild the Temple. He fulfilled Isaiah’s prophecy: “[The Lord] says of Cyrus,  He is my shepherd, and shall perform all my pleasure: even saying to Jerusalem, Thou shalt be built; and to the temple, Thy foundation shall be laid”  (Isaiah 44:28). When the Second Temple was finally completed in 516 B.C., all the Old Testament prophets had been dead for years. The reconstruction of Jerusalem and the rebuilding of the Temple, which had taken a long time, fulfilled their prophecies.  Both prophets and kings disappeared after this period.

The Book of  Nehemiah, cupbearer to Artaxerxes I (464-424 B.C.) describes the restoration and repair work in the City of Jerusalem.  Bearing letters from the King and escorted by a military guard, Nehemiah gained permission to rebuild the walls and seems to have become governor of Judaea.  Subsequently Ezra arrived in Jerusalem, perhaps about 397 B.C., and he too had royal authority, this time to reform the faith of Yaweh.  An expert in the law, he enforced a rigorous code,  prohibiting marriage between Jews and Gentiles, and instituting a rule which resulted in the ever-growing prescripts and prohibitions which had become such a conspicuous burden by the time of Christ.

The Second Temple was the vast structure which Christ first saw when His parents took him to Jerusalem and of which He Himself predicted that “not one stone would be left upon another” (Luke 21: 5-6). In 70 A.D. during the inevitable Jewish revolt, the Roman armies commanded by Titus destroyed the City of Jerusalem, burned the Second Temple, and banished the Jews, fulfilling the prognostication of Jesus.

The return, the repair of the city, and the rebuilding of the Temple, “exactly as the prophets of Israel” foretold, took place between 538 and 397 B.C.

Judaism was a proselytising religion for many centuries after this; converts from

many nations joined the faith, so it cannot be maintained that the Jews are a single race; many are not Semitic.

Since the return, the repair of the city, and the rebuilding of the Temple, “exactly as the prophets of Israel” foretold, took place between 538 and 397 B.C. or so, after those prophets were dead, the nationalists who want to reconstitute a modern Israel cannot honestly claim they are doing so as fulfilment of Biblical prophecy. Christians who know the Bible and their history will not be deceived by dangerous arguments.

They are dangerous not just because any attempt to rebuild the Temple on the site of the Dome of the Rock might well, under existing circumstances, result in World War III, but because they apply the genuine promises as we have received them to a narrow nationalistic movement with its true genesis in the nineteenth century.  The New Testament language about the Kingdom of Israel, King David, Jerusalem, the Covenant, and the Temple, fulfills the Old, referring not to a literal or historical restoration, but to the whole people of God and His promises to “make all things new” (Revelation 21:5).  The promise to King David was renewed in Christ (Matthew 1:1; Luke 1:32-33; Romans 1:3). The Church seeks to build the new Jerusalem (Galatians 4: 26; Hebrews 12:22; Revelation 21:2), not to occupy and dispossess the inhabitants of the earthly city.  She is not called to atavistic nationalism but to the new heaven and the new earth (Revelation 21:1); the Temple that Christ promised to rebuild in three days was “the Temple of His body” (John 2:21); and the Son of David, when He came at last, promised a kingdom not of this world.

The author is a writer and teacher who lives in British Columbia, Canada.